Play by the Rules
Kevin's got a new flame! Now that Kevin has an active love life, things are looking up. That is, until Kevin's secret admirer pops up to throw Kevin into the middle of an Archie-style love triangle! To make matters more complicated, Veronica roped Kevin into performing in the school play, and both Kevin's boyfriend and not-so-secret admirer are involved, sparking jealous tension on set. Will Kevin make it through Act I before the scenery comes crashing down around his blossoming relationship, or will he get stage fright? Let the drama begin!
See More See Less

Kevin Keller
The secret is 'out' and Kevin Keller is here, starring in his very own series! Kevin Keller is Archie's first gay character and the most popular addition to the Riverdale crowd in years. Follow Kevin as he becomes class president, gets published in the newspaper, and falls into a love triangle of his own!

Life With Kevin
LIFE WITH KEVIN introduces readers to an older, wiser and worldly Kevin Keller as he explores the big city with his BFF Veronica. A coming-of-age story that is both heartfelt and funny, LIFE WITH KEVIN reintroduces one of Archie's most popular characters in a new setting with a whole new cast of characters -- plus a handful of familiar faces! Written and drawn by Kevin's creator, Dan Parent, with
Veronica
Veronica Lodge is Riverdale's resident billionaire heiress. She's got a good heart, but she's also a bit spoiled, which can make her a pain sometimes! She has her sights set on resident everyman Archie Andrews, but to win his heart, she'll have to pry him away from her best friend and rival, Betty. 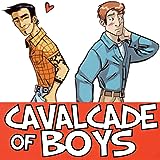 Cavalcade of Boys
Cavalcade of Boys welcomes the reader on a journey into the lives and loves of several young gay men drawn from the imagination of artist and author Tim Fish. Each vignette touchingly romps through modern love in this follow up to Fish's coming of age graphic novel, Strugglers.
Your Pal Archie
Classic-style Archie makes his return in this ALL-NEW, ALL-AGES comic from Ty Templeton and Dan Parent!