Knights of the Lunch Table Vol. 2: The Dragon Players

Knights of the Lunch Table
Vol. 2: The Dragon Players

Artie King, the uncrowned good guy of Camelot Middle School, is back with his pals Percy and Wayne in tow as he tries to evade evil Principal Dagger, avoid the school bully Joe and his Horde, and unravel the secret of a pack of mysterious magic cards he finds in his locker. Frank Cammuso's action-packed art and comic dialogue is sure to appeal to graphic novel fans and bring new readers to the format. It's knights, knaves, and nonstop fun!
See More See Less 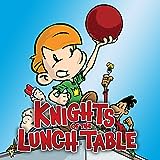 Knights of the Lunch Table
In this funny new series from Eisner Award nominee Frank Cammuso, the Arthurian legend is reborn--in a funny, average-joe, middle-school boy and his pals at Camelot Middle School.