Legend of the Sunset People #01

From the Fire to the Frost
The Myths and Legends of the Anishinaabe... based on a true story!When the Anishinaabe encounter a rival band of Southern aggressors, they are forced into a decision - either fight or flee. Deciding to attempt the path of least resistance, the Anishinaabe begin a year-long trek, across unrelenting terrain amid the change of the seasons while encountering strange supernatural creatures along the way. Will they escape their nemesis and find the haven they seek? Or will the hostile wilderness, unknown magic and their dogged pursuers defeat this close knit band of weary travellers?
See More See Less 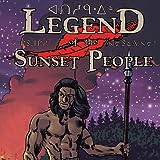 Legend of the Sunset People
The Myths and Legends of the Anishinaabe... based on a true story!