Lio: Happiness Is a Squishy Cephalopod

"LIO is brilliant! In this post-Calvin and Hobbes and post-Far Side world, this is the brass ring for cool!" --Dallas Morning News

* LIO is a pantomime strip featuring a curious young boy whose daydreams embark from reality destined for the dark chasm where wit and sarcasm collide.

* In describing his strip, Tatulli explains he was eager "to bring something truly different to the comics pages... something to appeal to all ages, drawn in pictures only. To tell a story without text, while updating the pantomime concept with a modern audience in mind."

* The result is a mind-bendingly humorous and astute journey into the darkly detailed world of young LiO--where a spit wad can put a school bus out of commission faster than a spider can hamper the efforts of the U.S. Postal Service.
See More See Less 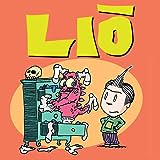