The Lobster is at his pulpiest in a pair of three-part stories drawn by veteran Lobster artist Tonci Zonjic. A trio of robots terrorize New York City, and the only thing more mysterious than their origins is their motives. When a pirate ship's ghostly crew appears on the Hudson River out of thin air, the harbor patrol calls on the Lobster!

Lobster Johnson
After years of captivating fans from the pages of Hellboy and B.P.R.D., the pulp-style adventures of Lobster Johnson take the limelight in this collection of the Lobster's first solo series.

Sledgehammer 44
A man in a suit of iron drops from an American warplane onto a French battlefield and unleashes a powerful cosmic force on an army of Nazis, their massive war machine, and their most dangerous agent, the deadly Black Flame! Comics superstar Mike Mignola creates an alternative story of a World War II robot.
Abe Sapien
A century ago, paranormal investigator Edward Gray fought and destroyed a powerful warlock off the coast of the island of Saint-Sébastien. In the early 1980s, the B.P.R.D.'s newest agent was sent to retrieve the warlock's remains. But Abe Sapien is ill prepared for the dark forces that block his way. Written by Hellboy creator Mike Mignola, and featuring the haunting art of Jason Shawn Alexander 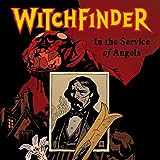 Witchfinder
Mike Mignola teams up with artist Ben Stenbeck (B.P.R.D.: The Ectoplasmic Man) for a look into one of the Hellboy universe's greatest enigmas: nineteenth-century occult investigator Edward Grey!
Frankenstein Underground
**Hellboy's creator takes on history's greatest monster!** After a fight with Hellboy, Frankenstein's monster escapes the terrible Mexican laboratory where he was imprisoned and discovers strange creatures beneath the desert, where he'll learn some of the greatest secrets of the mystical world! * One of the most anticipated comic books of 2015! The iconic Frankenstein creature as imagined by the m