This volume collects issues #9-12 with a script to issue 9 and a complete cover gallery of Magnus: Robot Fighter.

Magnus, the martial arts expert and ultimate robot fighter, has reunited with his father, the artificial intelligence known as 1A. Satisfied to have a new purpose in life, Magnus is sent on a mission to free a monstrous creature known as the Basilisk. But once released, it can't be stopped or contained... and it believes itself to be God! Can Magnus and his former pursuer Leeja hit reboot on this devastating new threat, and is this the end or just a frightful new beginning?
See More See Less 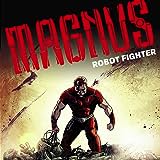 Solar: Man Of The Atom
"This all started with an accident..."AN ALL-NEW CORNER OF THE GOLD KEY UNIVERSE! Flooded with experimental radiation that grants him unbelievable powers, the brilliant-and-obsessive Dr. Phil Seleski seeks to unlock the secrets of the universe, begrudgingly becoming a "hero" along the way. But can a single man be trusted with near-limitless abilities? What will this mean to the ones he loves? And
Turok: Dinosaur Hunter
THE GOLD KEY UNIVERSE BEGINS HERE! Classic Characters by some of Comics Hottest Creators! - Magnus, Solar, Turok and Dr. Spektor! Dynamite is proud to present an all-new adventure ongoing from superstar GREG PAK (Batman/Superman, World War Hulk) and incredible artist MIRKO COLAK (Red Skull: Incarnate, Conan)! Shunned from his tribe, a young Native American named Turok fights to survive, making
Doctor Spektor: Master of the Occult
TV Legend. Wall Street Wolf. Internet Mogul. Tabloid Bad Boy. Master Metaphysicist. Spiritualist. Monster Hunter. Doctor Adam Spektor is all of these things... and less. For fifteen years, Spektor has traveled the globe to smoke out and defeat werewolves, vampires, ghosts and everything else that goes bump in the night. Yet his success has brought him no peace... some part of him is missing; somet 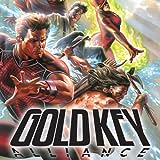 Gold Key: Alliance
Turok, Dinosaur Hunter. Magnus, Robot Fighter. Solar, Man of the Atom. The Mighty Samson. The legendary heroes whose adventures have thrilled comic book readers for over half a century are back, only this time they all share the same time and the same world – ours! In this breakneck first issue, each warrior wrestles with the perils of the twenty-first century, but a greater evil is approaching,