Merciless: the Rise of Ming

Set decades before the would-be interplanetary conqueror turned his attentions upon an unwitting Earth, MERCILESS chronicles the formative years of Prince Ming, heir to all he surveys and all the fabulous peoples of distant Mongo, a planet politically divided by its divergent species and as physically fractured as the ring of shattered moons orbiting it. Disillusioned by his father's rule and anxious to begin his own dynasty, Ming engineers events to seat himself upon the imperial throne of Mongo, sooner rather than later. Ming's ascent to power is as much a descent into his own depravity as he strikes alliances and sparks wars of expansion to cement his claim, finding time for love (or lust, depending on one's point-of-view) and uniting all of Mongo under one rule... HIS. Ming's adversaries underestimate him at their peril. He has a plan. In fact, he ALWAYS has a plan... and it doesn't end on Mongo. Armed with mind-boggling weapons of planetary destruction, Ming the Merciless won't settle for anything less than dominion over his world... and every galaxy in the known universe!

This volume collects the complete 4-issue mini-series by Scott Beatty and Ron Adriam along with all of the fully painted covers by Akex Ross as well as sketches and character designs by Alex Ross.

"Beatty keeps Ming cool and merciless just the way he should be. It's actually very refreshing to see that the Ming we are introduced to at the height of his power was as cold and calculating a man during his father's reign." - www.comicattack.net
See More See Less

Merciless: the Rise of Ming
Visit scenic Mongo before Ming's rise to power! In this prequel to the critically acclaimed and best-selling FLASH GORDON: ZEITGEST, Prince Ming begins his rise to dominion over the entirety of Mongo! But who (or what) was Ming before he was 'Merciless'? Find out here as the origin of one of science fiction's preeminent villains is presented in all its diabolical details!

Warriors of Mars
Before John Carter, another earthman visited the Red planet: Lt. Gullivar Jones. Now these legendary warriors are brought together for the first time! When Lt. Guillivar Jones happens upon a mysterious old man with a beautiful carpet he soon finds himself transported through space and time to the planet Mars where he meets the beautiful Princess Hera and a ferocious tribe of Red Martians bent on c
Lords of Mars
An epic crossover event starring the two greatest heroes of pulp fiction begins this June! The legendary Ape-Man has claimed his title as Lord of Greystoke, but his very life is threatened when a hunting excursion with his fellow "gentlemen" goes disastrously wrong. Meanwhile, on Mars, John Carter is forced to respond to a veiled threat from his defeated enemies. Mars and Earth might be separated 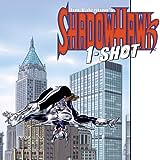 Shadowhawk One-Shot
Originally published in the sold-out IMAGE COMICS hardcover, this stand-alone story reunites JIM VALENTINO with CHANCE WOLF on his seminal character! Eddie Collins and his father, James, must come to an understanding about what being ShadowHawk means for both of them. A very special issue at a very special price - a must-have item for the collector or the curious!
Dejah Thoris
Prepare yourself for Dejah Thoris as you've never seen her before! A shocking conspiracy unravels in Helium as Dejah's father has gone missing. In the wake of assuming the throne, Dejah learns secret information from her past that will have resounding effects on the kingdom _ and her life! Join Frank J. Barbiere (The Howling Commandos of SHIELD, The Precinct) and Francesco Manna (Vampirella #100)