"This second stunning anthology unleashes a wave of top-flight Asian comics creators - each running rampant through their dark imaginations!

Monster Massacre is an exciting new graphic anthology series for fans of science fiction, fantasy, big monsters and all-out adventure! Jaw-dropping oversized pages showcase astounding new stories from the best creators in comics from all over the world.

In this thrilling second volume, the greatest Asian pop culture talents - from Singapore, Indonesia, Hong Kong, Korea and Japan - give free rein to their imaginations in this massive creator-owned testament to Mayhem, Mischief and Monsters!

Editor and Monster Mastermind Dave Elliott says, "For those of you who immediately jump to Pokémon or Sailor Moon when you think of Asian comic or manga artists, MONSTER MASSACRE 2 will forever cure you of that stereotype!"

PLUS: Short stories in the worlds of The Weirding Willows, Carpe DIEm and Sharky/Maximum Force! 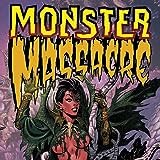 Monster Massacre
The greatest talents from around the world come together to show you how much fun creating comics can be! Monster Massacre is an exciting new graphic anthology series for fans of science fiction, fantasy, big monsters and all-out adventure! It's also an introduction to a Who's Who of comics talent: past, present and future! From all around the world, the greatest comic talents are given