At the height of the Renaissance, warring factions vie for control of Leonardo da Vinci’s destructive arsenal. The only thing standing in their way is Leonardo’s young apprentice and her nine-foot tall mechanical bodyguard. Together, they navigate a world of wicked men and war machines, determined to save Leonardo from the world—and the world from Leonardo.

"Poor is the pupil who does not surpass his master." - Leonardo da Vinci
See More See Less 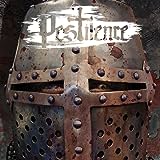 Pestilence
NEW SERIES! It's the late 14th Century, and a Great Pestilence—the "Black Death"— is sweeping across Europe, killing over 100 million people. BUT, what if history as we know it was a lie? What if, in reality, this was no straightforward plague, but the FIRST non-recorded Zombie Infestation of man? Ex-Crusader Roderick Helms and his fellow "black ops" agents the Church, Fiat Lux, must seek o