Shadows Within
#2: In "Rise of the Axe," Saxon, Kenzie, and Lieam hope to end their suspicion that Lockhaven's secrets are being sold, and journey through the gates of the grain peddler's destination, Barkstone. #3: In "The Dark Ghost," after their violent visit to the hidden mouse city of Barkstone, guards Kenzie and Saxon are held captive by a mouse long presumed dead. Could this stranger be the mastermind of a treacherous secret plot targeting the Guard's home of Lockhaven? #4: "Midnight's Dawn": Rain drenches the soldiers of the Axe as they march on Lockhaven. As they tromp through mud and navigate the downpour, Lieam listens to the ramblings of the Axe's commander. Saxon, Kenzie, and Celanawe face similar difficulties trying to catch up with the armored horde in hopes of preventing an attack on the home of the Mouse Guard. #5: It's a dark hour for three of the Guard's finest‚ who only went looking for a grain merchant.
See More See Less

Mouse Guard: Fall 1152
The fearless Mouse Guard are dispatched to find a missing merchant. Their search reveals much more than they expect, as they stumble across a traitor in the Guard's own ranks. The volume collects the first Mouse Guard series and features special bonus material. 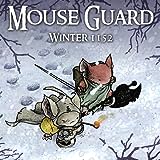 Mouse Guard: Winter 1152
It is the Winter of 1152. It is a harsh winter, a cold and icy season. And the Guard face a food and supply shortage that threatens the lives of many throughout the land. Saxon, Kenzie, Lieam, and Sadie, led by Celanawe, traverse the snow-blanketed territories seeking aid and acting as diplomats to improve relations between the mouse cities and the Guard. This is a winter not every Guard may survi
Mouse Guard: The Black Axe
Set in 1115, this prequel to Mouse Guard: Fall 1152 fulfills the promise the wise oldfur Celanawe made to Lieam the day his paw first touched the Black Axe: to tell the young warrior about the mouse who first wielded the deadly weapon. The arrival of distant kin takes Celanawe on an adventure that will carry him across the sea to uncharted waters and lands, all while unraveling the legend of Farre
Mouse Guard: Legends of the Guard Vol. 1
Winner of the 2011 Eisner Award for BEST ANTHOLOGY!
Mouse Guard: Legends of the Guard Vol. 2
The 2011 Eisner Award winner for best anthology is back with a second volume! In the mouse tavern the June Alley Inn, a new round of storytelling begins between the patrons. Their goal is to be declared the best story of the night in hopes of having their outstanding debt to the barmaid forgiven. Legends of the Guard continues the tradition of featuring handpicked artists and storytellers by serie