Baba Yaga and her fellow villains have gathered together the long lost pieces of the Sunstone of Ra with plans of unleashing an ancient and powerful highborn, Helios, against their enemies and the rest of the world. The guardian's of the nexus, Samantha, Sela and their fellow falsebloods in training must join forces against a highborn that not even their combined powers may be a match for. This is the battle that every Zenescope fan has been waiting for. Samantha versus Cindy. Beast versus Erica. Brittany versus Morrigan. Sela versus Venus. The Dark One versus Baba Yaga. Helios versus EVERYONE! With an ending that you have to see to believe! Featuring the long awaited return of one of the most popular characters from the Grimm Universe. This trade paperback culminates over two years worth of stories that have all lead to this moment. The evolution of the Grimm Universe is here and nothing will be the same. The Gathering and the Summoning are collected here for the first time in the final story arc of the best selling Myths and Legends series. Don't miss out!
See More See Less

Myths & Legends
Zenescope Presents a new ongoing series that promises to be one of the hottest independent titles of the year. After the milestone events of Grimm Fairy Tales #50 creatures from the realm of Myst have escaped into our world. Captured by the evil Baba Yaga for her sinister plans they are about to cause major havoc on earth. This first arc revisits the characters and story from the very first issue

Neverland
Wendy, Dr. Harlow and Cross find themselves transported to the magical world of Neverland where they begin their quest to rescue Michael and John from Pan's island. Their search is side tracked when the meet the islands less then friendly natives. Meanwhile Pan contemplates has his own sinister plans for the boys. This issue is a must have for every Grimm and Wonderland fan!
The Jungle Book
A pirate ship carrying four children crashes on the shore of a mysterious and merciless jungle. Each child is taken by a separate tribe of animals as a means to keep the peace between the species. It is a peace that will not last. Fifteen years later the children have now become young adults and each will have to face the destiny that awaits them in the unforgiving jungle. A place where only the s
Robyn Hood (2012-2013)
The BRAND NEW series that reinvents the classic tale of action and adventure in green is HERE!!! In the lands of Myst a tryant rules the city of Bree with an iron fist leaving its citizens living in fear and terror. But all hope is not lost when one man takes the first steps to finding the one person who might save them all. Meanwhile on earth Robyn has had a troubled life for many years since her 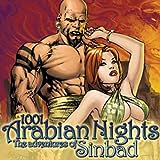 1001 Arabian Nights: The Adventures of Sinbad
Some call him a womanizer others call him charismatic, some think him a brute others charming but all know one thing: Sinbad is a serious bad-ass! Zenescope Introduces a Sinbad series that will reinvent the legend. When Sinbad is unjustly accused of murder and banished from his home city, he learns there is one artifact that might be able to clear his name, but the quest to find it is certainly no