Guest-starring the Defenders! Dr. Strange's team protects humanity from the impossible - so what does this uber-powerful group want with the New Mutants? Then, Cannonball and Karma return! But why are they suddenly years older? And what's up with the Warlock tech they're wearing? The New Mutants soon learn a terrible event has changed the course of their history - and the more they try to fix it, the worse it gets! The team thought they'd defeated their most unexpected foe - but they'll soon learn that while you can change the future, you can never escape it! It's the culmination of all the super-smart seeds DnA have planted throughout the series in a shocking story that - yeah, we're saying it - will change the New Mutants as you know them!
See More See Less

New Mutants (2009-2011)
RETURN OF LEGION PART 1 Cannonball, Dani Moonstar, Karma, Sunspot, Magma and Magik have been gathered once more, but can they stand against one of the most powerful X-Villains of all time? Legion is back!

X-Men: Legacy (2008-2012)
Professor X is forced to revisit the biggest challenge and the biggest failure of his career: Logan.
New X-Men (2004-2008)
Follow the exploits of the next generation of X-Men as they recover from more tragedies, celebrate more triumphs and deal with more superpowered villains than any group of kids should ever have to. Packed with wall-to-wall action, pitch-perfect dialogue and dynamic art, this is the X-Men title with something for everyone! 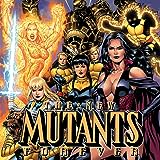 New Mutants Forever (2010)
The third generation of Xavier's pupils is back...like you've never seen them! New York Times best-selling author and X-Men visionary Chris Claremont returns to the young mutant heroes he created to turn their lives upside down! Their headmaster, Magneto, has just joined the Hellfire Club, and now the team faces a threat so terrible they're willing to join forces with the Black Queen, Selene! With
X-Force (2008-2012)
Cyclops has assembled a team of mutant warriors to do the things the X-Men cannot. X-Force, led by Wolverine, is tasked with taking down the big threats behind the scenes...permanently.