Working with her old crew -- the Magus, the Acolyte, the Bard, the Asp, and now, Grael, the demi-god -- Emerane, the thief known as The Night, devises a plot to steal back the money held by the richest in Umber, and invest it back in those who need it most. But Grael is imprisoned by the corrupt new Amaraddan guard and its power-hungry captain, and the plan won't go off without him. And then there's the matter of that captain, a man who will either rule Umber or destroy it, a man who's willing to give everything to hold onto his own power -- including his very soul. The fight for Umber begins now!
See More See Less

Night's Dominion
Umber: an ancient, sprawling city where the rich live like kings and the poor are lucky to get their scraps. At its center, the tower of Uhlume rises, guarding untold riches. Though heavily guarded, with the right plan... the right people... the treasure is free for the taking. Enter our five players: the Bard, the Acolyte, the Asp, the Magus... and a barmaid? But this barmaid knows the city bette

Kriss
For fans of The Graveyard Book and Through the Woods comes a different kind of YA fantasy graphic novel, in which a teen boy's search for his destiny leads him into darkness. Lean, ghostly pale, and permanently grim-faced, Kriss has always been an outsider in his small village. Not even his adoptive parents love him. Only Anja, the blacksmith's daughter, brings kindness and friendship into the 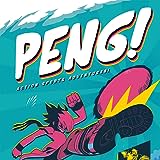 Peng!: Action Sports Adventure
Welcome to the All-World School of Sportsmanship, where kids from all over train to become the best athletes in a world obsessed with even the most marginal sports. PENG! follows students Rocky, Sassy, Ven, and Radley—also known as the FOOT KNUX. Together they will master action-packed "fringe” sports like kickball, breakdancing and hacky sack! Our heroes battle boredom, the sun in their eyes, 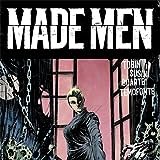 Made Men
You don't know Jutte Shelley, but you might know her family. Before she was a Shelley, she was a Frankenstein. These days, she's a Detroit Special Ops officer. At least she was, until she and her entire team were ambushed during what should have been a routine call. Jutte watched as, one by one, her friends were gunned down. And then, in a flurry of bullets, Jutte fell too. But Jutte isn't like ot
Spera: Ascension of the Starless
The Starless Queen is plotting an invasion of Spera, and has sent the merciless General Zeal to secure its capital. Unfortunately for the Queen, her daughter-the exiled adventurer Princess Pira-and Pira's best friend Princess Lono have discovered her plot...and will go to any lengths to stop her. Along with their friends-the fire spirit, Yonder, and the ruthless cat Chobo-Pira and Lono must set of