Octal is a curated catalog of comic pitch packets. Built around 8-page pilots, its volumes read like a comic anthology with bonus features-- all while providing first looks at potential books and series.

-= Celflux =-
An inexperienced priestess leads a disjointed group of reluctant heroes to save her planet from an ancient evil.

-= Disunity =-
Earth is plagued by a series of inter-dimensional incursions after a physicist's failed experiment puts the entire multiverse in jeopardy.

-= Ulfberht =-
A trio of viking outlaws embark on a journey to find and destroy the powerful sword, Ulfberht.

-= Charmer =-
A young sorceress attempts to destroy the cult that raise her to be their ultimate sacrifice.

-= Travelers =-
An amiable, accounting android and a high-strung detective travel through a dystopian Eastern Europe, solving crime along the way and shattering preconceptions about artificial intelligence and intelligence in general.

-= Possession =-
Greek gods imbue young lovers with superhuman strength and endurance as voyeuristic foreplay but when fabled monsters attack, the couple must unearth and neutralize their source.

-= The Seekers =-
A pastor and an orphaned girl form an uneasy alliance dedicated to exorcising the Old West's demons.
See More See Less 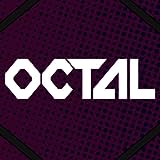 Octal
Octal is a curated catalog of comic pitch packets. With each pitch packet built around an 8-page pilot, Octal functions as a comic anthology while providing first looks at potential upcoming comic books / series and bringing a bit of transparency to the comic pitching process.