Orchid Cross Psypher: Nightshift
Lánhuā Wen , codename Orchid, is an infiltration agent for the American Defense Service, an organisation created by the U.S. government to combat threats to national security from within the American borders. And she is really, really good at what she does. Five years ago the superhero known as Psypher sacrificed himself to stop the terrorist called Living Nightmare. Nightmare was arrested and Psypher was given a hero's funeral. But a while back somebody else has taken up the mantle. And now it is time for the two to meet.
See More See Less 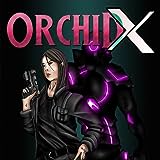 Orchid X
After World War 2 the U.S. Government began privatising certain government institutes to prevent corruption at the eve of the cold war. President Eisenhower believed that, in addition to combat corruption, he could also lower the defense budget while still having a strong military force. Over the course of his term, he combined C.I.A., D.O.D., F.B.I. and N.S.A. into one new institution. This new i