"You've played the award-winning, free-to-play roleplaying game, Path of Exile. Now find out how the nightmare began through Victario's eyes in the graphic novel that serves as prequel to the action-packed game!
Before the Cataclysm, before the first exile set foot upon the corrupted shores of Wraeclast... there stood the Eternal Empire. There raged the Purity Rebellion. And there was Victario Nevalius, the People's Poet. Finding himself among the fearsome Karui, Victario negotiates an alliance with their king, Kaom, to oppose the tyranny of Eternal Emperor Chitus. Can Victario swell the Purity Rebellion's ranks with the greatest warriors in the empire? Can King Kaom defeat the finest archer in the empire, Marceus Lioneye? How will Victario survive to pen the tale? And how does this far-flung rebellion connect to the apocalyptic visions that plague Victario's every waking hour?"
See More See Less

Path of Exile
Before the Cataclysm. Before the Nightmare. You've played the hit, free-to-play Action RPG Path of Exile. Now see how it all started...Victario Nevalius, the People's Poet of Sarn, never fancied himself a hero. And yet, he now finds himself among the fearsome Karui, negotiating an alliance to oppose the malignant Gemling Thaumatocracy of Emperor Chitus. Can King Kaom defeat Marceus Lioneye? Will V 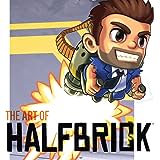 The Art Of Halfbrick: Fruit Ninja, Jetpack Joyride and Beyond
Since 2001, the Australian game company Halfbrick Studios has been changing the mobile games scene. After seven years of making licensed games, Halfbrick took a chance and released Fruit Ninja to the world-- and the world became obsessed with slicing cartoon fruit. Propelling themselves forward on the smash success of Fruit Ninja, Halfbrick released even more games that took the gaming community b
Pathfinder
Paizo's incredible award-winning, best-selling fantasy world, fiction line and tabletop RPG is now the ultimate fantasy comic from Dynamite Entertainment! Valeros can rely on only his sword arm and his friends, the mysterious and beautiful sorcerer Seoni and silver tongued quick-witted elven rogue Merisiel, but nothing can prepare him for the dangers that lurk ahead. The scattered and chaotic gobl 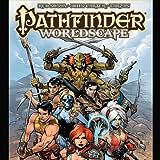 Pathfinder: Worldscape
Into the Worldscape - Dynamite’s fantasy adventure crossover event kicks off as the Pathfinders are drawn into the mysterious Worldscape, where the greatest warriors of Hyboria, Barsoom, Golarion and Earth clash in an ancient battle of life and death! Magic, monsters, and mystery co-starring Red Sonja! The Worldscape beckons in a tale written by Pathfinder publisher Erik Mona (Pathfinder: Hollow 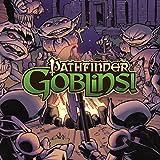 Pathfinder: Goblins!
The goblins from Paizo's Pathfinder RPG are pint-sized psychopaths, wreaking havoc across the land. Infamous for unpredictable attacks, catchy raiding songs, hatred of dogs, and fear of horses, goblins blend mischief and murderousness like no other monsters. And Pathfinder fans adore them! Since their appearance in the very first Pathfinder release, Pathfinder goblins have starred in numerous adve