This multifaceted anthology collects over 25 stories from the first decade of Jason's career, including his remarkable calling card, the novella-length thriller "Pocket Full of Rain," which has never before been published in English. Like a number of his initial stories, "Pocket" is actually drawn with realistic human beings instead of blank-faced animal characters - a true revelation for Jason fans. In fact, this book showcases three distinct styles: his earliest "realistic" drawing style an intermediate "bighead" cartoony style that still features humans, and the "funny-animal" style for which he's now best known. The book reveals a young cartoonist experimenting with styles, working through his obsessions (love, loneliness, film, Hemingway) and paying tribute to his cartooning heroes (Wolverton, Moebius, Pratt). Also, croquet-playing nuns, sentient cacti, autobiographical drunken escapades, lists of people who deserve to die, and a color gallery featuring God cheating at Trivial Pursuit.

"This collection is all over the place but it's all Jason, and like all his work it's funny and deep and smart and I cannot get enough of it." - James Sturm, from his introduction
See More See Less

Isle of 100,000 Graves
Five years ago, little Gwenny's father found, inside a bottle, a map with instructions on how to reach the mysterious Isle of 100,000 Graves and its legendary treasures - and then he vanished. Now Gwenny, having stumbled across another bottle-shipped map, enlists the dubious help of a shipful of pirates, sets out to find the island, and her long-lost dad. She soon discovers that the Isle is the lo 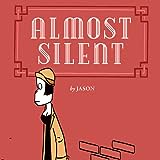 Almost Silent
This graphic novel omnibus includes You Can’t Get There From Here, about a monster love triangle; Tell Me Something, about love, recovered; Meow Baby!, short genre comics; and The Living and the Dead, a hilariously deadpan (and gory) take on the traditional Romero-style zombie thriller. All of these yarns star Jason’s patented cast of tight-lipped (or -beaked) bird-, dog-, cat- and wolf- 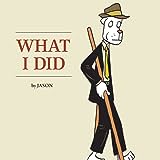 What I Did
This is a collection of three of the acclaimed cartoonist's earliest graphic novels, which are about Scandinavian mysteries, childhood stunts gone wrong, and much more. Three classic Jason volumes in one omnibus!
On the Camino
Northwestern Spain, observed with the eye of an artist, chronicling both the good (people, conversations) and the bad (blisters, bedbugs) he encountered on his journey. Full of quiet incidents, odd encounters, small triumphs, and the occasional setback, On the Camino is the first implicitly autobiographical long-form work by a master cartoonist.