Read the volume of Princeless that launched the critically acclaimed spinoff, Raven: The Pirate Princess, now in deluxe format with never before seen behind the scenes special features.

Adrienne and Bedelia have been on a quest to save Adrienne’s sisters, but when they stumbles upon an unknown princess trapped in a tower, they decide they can’t just leave her locked up.  But they’re about to find off they’ve bit of more than they can chew when they rescue Raven Xingtao, the daughter of the pirate king.  Adrienne has met her match and if she’s not careful, Raven may steal the dragon right out from under her
See More See Less

Princeless: The Pirate Princess
Princess Adrienne is back! This time Adrienne and Bedelia have found another young princess locked away in a tower and decided to rescue her. But Princess Raven is more than meets the eye and Adrienne may have finally met her match.

Princeless: Get Over Yourself
The princess who ran away is back along with her new friend, Bedelia the girl blacksmith and her loyal guardian dragon Sparky. Now that Adrienne has escaped, she has her eyes set on freeing her sisters. First up is the most beautiful girl in all the kingdom, Angelica. However, things will not be easy for our heroines as the King believes Adrienne is dead and has put a bounty on her killer: Adri
Princeless: Be Yourself
Adrienne and Bedelia are off to the swamp to rescue Adrienne's sister Angoisse, but when a crash landing leaves them separated and stranded in a swamp full of dangerous creatures, Adrienne, Bedelia, and Sparky must face their fears just to find eachother.
Princeless: Make Yourself Part 1
In the mountains of the outer rim of Ashland, there exists an elite group of female dwarves whose only purpose is to protect the dwarves from an attack by dragons. They are called the Dragon Slayers. And they just got word that there’s a dragon headed their way: a pink dragon with striped horns. They aim to bring it down. 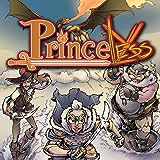