Collects issues #19-34!
Kulan Gath controls the land. Red Sonja and her companions have been sent to the other side of the globe. Now the She-Devil must battle her way across Hyboria, encountering strange animal-men, vicious undead pirates, mysterious sea creatures and more to end the dark sorcerer's reign of terror. New allies are revealed, old allies are lost, and villains abound as Sonja comes face-to-face for the final time with Kulan Gath in a battle that can only end with the DEATH of Red Sonja! Written by Michael Avon Oeming and Brian Reed, and illustrated by Homs, Fabiano Neves, Mel Rubi and more, this 400+ page omnibus features issues #19-34 of the groundbreaking series!
See More See Less

Red Sonja: She-Devil With a Sword (2010-2013)
Dynamite presents... The ultimate Red Sonja. The opening issue of this new, ongoing series finds Sonja on an epic quest; a quest to rid the world of an ancient evil. And a quest that places her in battle between the Zeddas and the Kingdom of Gathia. The legend of Red Sonja begins here! This story re-introduces Red Sonja to the world of comics, and is a classic in the making! 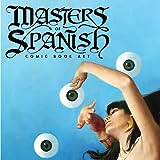 Masters Of Spanish Comic Book Art
Masters of Spanish Comic Book Art is a celebration of the great artists who revolutionized horror comics in the 1970s with their work on Warren's Vampirella, Creepy, and Eerie horror comics. This first-ever comprehensive history of Spanish comic books and Spanish comic artists reveals their extraordinary success -- not just in Spain and America, but around the world. Containing artwork from over 8