The most badass archer in comics is back in a brand new ongoing series! From drug lords to corrupt bankers to the things that go bump in the night, no evils that plague the streets will be safe when Robyn Locksley sets up shop as a private detective in New York City. While Robyn settles into her new life, the Cabal, a collective of mysterious and powerful individuals, sets their sights on bringing down the hooded heroine, who will face the biggest threat of her life.

"A genius modern reconstruction of the Robin Hood Tale." —The Pulbox

"Robyn Hood continues to be one of the best female-starred books on the stands." —Unleash the Fanboy
See More See Less

Robyn Hood (2014-2016)
Zenescope's fan-favorite character gets her own ongoing series The critically acclaimed creative team returns. Great jumping on point! The most badass archer in comics is back in a brand new ongoing series! From drug lords to corrupt bankers to the things that go bump in the night, no evils that plague the streets will be safe when Robyn Locksley sets up shop as a private detective

Robyn Hood: Legend
Everyone's favorite female archer is back in this brand new miniseries! Robyn thought she lost everything, but when the villainous Guy of Gisbourne makes his way to Earth, Robyn is faced with a choice. Return to Myst to save the people of Nottingham once and for all, or live life as a normal person. The final volume of the fan favorite Robyn Hood trilogy begins now...
Robyn Hood: Wanted
In this sequel to the smash hit Robyn Hood mini-series, Robyn Hood returns when a mysterious villain calling himself "the Sheriff" begins to terrorize the city of Bree, now called Nottingham. The people that Robyn once liberated are again in need of her help. But with looking for her on Earth, Robyn has her own problems to deal with. Can Robyn rise up once again and be the hero that Nott
Robyn Hood: The Hunt
Robyn has finally taken down the monsters and villains that have plagued New York for far too long. Now, with the streets safe again, Robyn unfortunately isn't going to get to enjoy them. After being transported to an otherworldly, high tech, maximum security prison, she must fight for her life from some of the very creatures she has placed there. Will she survive with enough of herself intact to 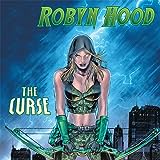 Robyn Hood: The Curse
After a daring and dangerous escape from a sadistic super-max prison, Robyn is finally back home where she belongs. But as she re-acclimates to her "normal" life in New York City, Robyn gets a long distance call from her best friend, Marian Quin. A new evil has been released and Marian needs Robyn's help to send it back from where it came... But this battle is about to get more personal than eithe