In "Reactivated," Agent Wade begins his mission with partner J.J. Flynn in a mining town locked down in a labor dispute and a siege of the undead.

Plus, the two agents go undercover in an isolated, snowbound, debauched Army fort under slow attack by the undead-uncovering a Donner-like party and the fact that the wretched things are arising in different species everywhere.

Collecting the first six issues of the acclaimed zombie-Western epic with an edgy topical bite. 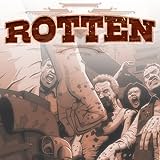 Rotten
A new twist on zombies with action, horror and the uncomfortably recognizable in the old West! A stop-lossed Army vet. A president in office without the popular vote. A terror crisis gripping the nation. Meet William Wade, newly minted and seriously resentful secret agent for President Rutherford B. Hayes. His mission with cerebral partner J.J. Flynn: travel the West and investigat