'I know he kissed me and said he loved me! But that was only because we were both frightened...'

Sally Rawlings had never even heard of Warina Island when the letter arrived from old boyfriend, Howard Morgan, offering her a new job and a new start in this South Pacific paradise.

Is this also a second chance for romance with her old flame? Or will new passions flare when the island's rugged boat skipper, Sam Burton, sails into her life?

One thing's for certain, with Howard's wildcat sister Maria around, there will be tropical storms in paradise before Sally even finds her feet!
See More See Less 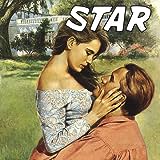 STAR - Love Stories in Pictures
Vintage romance comics from a more innocent age! From the 1960s until the 1990s, STAR - Love Stories in Pictures entertained eager readers with book-length romantic dramas in comic strip form. Delving into these timeless tales - like revisiting love letters from the past - we bring you a classic STAR selection of - Tales heaving with passion, and yesteryear's fashion, Of secret embraces in