Nick Fury, former director of the now-defunct S.H.I.E.L.D, has gathered a special handpicked team. Young and untested, the Secret Warriors are the offspring of the most powerful forces on Earth — and with Fury’s guidance, they might just have what it takes to save the world. But their mission is upended when Fury uncovers a bombshell Hydra conspiracy that reaches back for decades to the very beginnings of S.H.I.E.L.D.! As the Howling Commandoes reunite, and the Secret Warriors face Norman Osborn’s Dark Avengers and Thunderbolts, the Leviathan stirs in the darkness, preparing to take on Hydra! The only group that can stop either of these world-conquering organizations is Nick Fury’s Secret Warriors. But are these young soldiers unraveling under the pressure?
See More See Less

S.H.I.E.L.D. (2011)
The history of S.H.I.E.L.D. is revealed! With the fate of the future hanging in the balance, can Michelangelo keep Da Vinci and Newton from killing each other, and destroying the Brotherhood of the Shield?
Secret Warriors (2017-2018)
Collects Secret Warriors (2017) #1-5. A Secret Empire calls for Secret Warriors! Captain America has been revealed to be an agent of Hydra - and now he's coming for the Inhumans! But S.H.I.E.L.D. Agent Daisy Johnson, a.k.a. Quake, wants no part of Hydra, and is heading underground! Recruiting Ms. Marvel, Moon Girl, Devil Dinosaur, Karnak and Inferno to her cause, she'll fight to set things righ 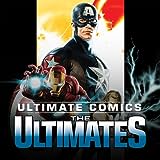 Ultimate Comics Ultimates
The next era has begun. As they struggle to find their place in the world, the The Ultimates face game-changing threats even they can't handle. And with the heart of the team missing in action, the country's last stand of defense may be on its last legs.
S.H.I.E.L.D. (2010-2011)
Leonardo Da Vinci was an agent of S.H.I.E.L.D. So was Issac Newton. And Imhotep and Zhang Heng and Galileo. They saved the world long before Captain America or Iron Man were ever born, but what does this mean to our heroes of today?