SECOND ISSUE! Leaping from the pages of the DEVI/WITCHBLADE crossover event in January, Graphic is now re-releasing the hit series for a new generation of readers with an all-new backup story and new cover by acclaimed artist JENNY FRISON! From filmmaker, Shekhar Kapur (Elizabeth, Elizabeth: The Golden Age, The Four Feathers) comes DEVI, the warrior goddess of divine myth. Tara Mehta, an unsuspecting young woman in the futuristic city, Sitapur is the new Devi. Tara Mehta gets further embroiled into the mysterious underworld of Sitapur as forces align to pull her towards their own agenda. Will Tara survive or will she be torn apart by destiny? Devi is a story about a young woman battling for survival in a landscape of ancient legends, duty and fate. Where will she fall? Between the Divine and the Diabolical there is Devi. 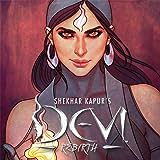 Purgatori
Spinning out of Dynamite's best-selling Chaos! Universe, Purgatori flies like a vampire bat out of hell into the pages of her own ongoing series! Trapped in hell, the bitch-queen learns that the Devil doesn't play games. Can she outwit Lucifer or will he make her regret the day she crossed him? The titillating tale begins right here!
Tales From Wonderland
Return to Wonderland has returned in this first one-shot issue revealing the mysterious origin of Wonderland's self imposed ruler, the Queen of Hearts. When two young twin girls are pulled into another dimension their purity will not be enough to save them. Lost, scared and unable to escape, the girls must find ways to adapt as they eventually realize that being raised by madness itself isn't all
Escape From Wonderland
The beginning of the end is here. The final piece to the Wonderland trilogy brings the powerful story of Calie Liddle full circle. Her infant daughter was taken from her arms and brought into the realm of madness. Now Calie must re-enter the one place she has tried for so long to escape. The moment of truth has arrived as the girl who became a woman now sets out to become a hero. The one person wh
Wonderland
Calie Liddle is BACK! And the series that every Zenescope fan has been waiting for is finally here. When Calie escaped from Wonderland she wanted to believe she was finally free from the realm of madness. She wanted to believe she could live a normal life. But she was wrong. Now Calie and her daughter Violet are on the run from the realm of madness. Meanwhile, a child returns from a carnival with