The soaring Sentinel of the Spaceways makes a MARVEL MASTERWORKS splash with his unmatched solo series. Illustrated by the master of man, menace, and motion, the one-and-only John Buscema, and featuring some of Stan Lee's most inspired and socially-charged scripts of the Silver Age, the adventures of Norrin Radd rank among the definitive tales of all Marveldom! Not only will you be awed beyond imagination by the Surfer's origin, you'll also face alien invasions, be torn down to the depths of hell by the utterly evil Mephisto, struggle against the Stranger, and face galaxy-conquering barbarians set on the destruction of...well, everything! Lest we forget what by many is considered the most beautifully rendered story in Marvel history, the Surfer's tête à tête with the mighty Thor! These double-length stories of drama and despair are a must-have for any and every Marvelite, and to prove we mean it, we're including the Surfer's first-ever solo adventure from the pages of FANTASTIC FOUR ANNUAL #5 as bonus!
See More See Less 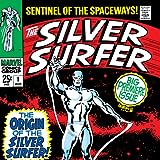 Tales of Suspense (1959-1968)
Watch his awesome approach! Listen to his ponderous footsteps as he lumbers closer... closer... for today you are destined to encounter - THE INVINCIBLE IRON MAN!

Ghost Rider (1973-1983)
The Spirit of Vengenace rides out of hell, and into his very first ongoing series! The Witch-Woman has risen again, and she won't rest until she's got Johnny Blaze in her clutches!
Amazing Adventures (1970-1976)
Collects Tales Of Suspense #52, Amazing Spider-Man (1962) #86, Amazing Adventures (1970) #1-8 And Daredevil (1962) #81. She started as a super-spy and ended up a super-star! After failed endeavors with the Crimson Dynamo, Natasha Romanova ditches her fishnets for a black bodysuit and a solo crime-fighting career against gangsters and terrorists, in rare stories not reprinted in decades! Goliath