Gwen Stacy is back in the webs and has an All-New, All-Different mystery to solve: the reappearance of the Lizard! The Spider-Woman of Earth-65 was convinced that the Lizard's threat died in her arms along with Peter Parker. But a new reptilian rampage leaves her with doubts not only about Peter's life, but also his death. While her father, Captain George Stacy, struggles with Gwen's double life, troubles mount as the Osborns make their debut — and Gwen finds herself on S.H.I.E.L.D.'s most-wanted list! Perhaps Jessica Drew, the Spider-Woman of Earth-616, can offer some wise lessons about power and responsibility that might be handy when Gwen battles the Goblins! Plus: Discover who wields the shield as Earth-65's Captain America joins the fray — but will she be on Gwen's side?
See More See Less

Spider-Gwen (2015-2018)
Gwen Stacy is back on the webs and has all-new, all-different mysteries to solve.

Spider-Gwen (2015)
Spider-Gwen spins into her own series! Gwen Stacy is Spider-Woman, but you knew that already. What you don’t know is which friends and foes are waiting for her in the aftermath of Spider-Verse! 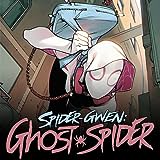 Spider-Gwen: Ghost-Spider (2018-2019)
Collects Spider-Gwen: Ghost-Spider #1-4 And Spider-Geddon: Ghost-Spider Video Comic #1. Gwen Stacy makes her sensational return! The Spider-Woman of Earth-65 is picking up right where she left off, fighting crime in her home reality — unaware it sits on the precipice of interdimensional calamity! Spider-Geddon is about to rock Gwen's world! Finding herself trapped in a parallel dimension as h
Spider-Man/Spider-Gwen: Sitting In A Tree
Collecting Spider-Man (2016) #12-14, Spider-Gwen (2015B) #16-18. K-I-S-S-I-N-G! That's just one of the things that makes this a very modern Marvel team-up, as the two most sensational web-spinners of the 21st century cross paths — and lock lips! Miles Morales and Gwen Stacy are two young heroes from different Earths, but what threat could unite the Spider-Man and Spider-Woman of the new gener
Spider-Man (2016-2018)
Miles Morales has been doing the super hero thing for a while, now, but after SECRET WARS, he’ll be a full-fledged member of the Marvel Universe. Swinging next to The Invincible Iron Man, The Mighty Thor and the All-New Captain America as a card-carrying member of the Avengers is an adventure, but it’s not all fun and games for New York City’s main Spider-MAN!