Team-up time is over — it's Spider-Man vs. Deadpool! When Spidey learns that Wade is selling S.H.I.E.L.D. tech on the black market, it's the last straw — bromance no more. The two biggest characters in comics are throwing down, no holds barred. The battle takes them all over the Marvel Universe — and climaxes in a face-off with the Chameleon! He's upped his game from petty crook to one of the world's most terrifying super villains. Spidey and Deadpool will do their darnedest to take him down, but it's hard to punch someone when he could look like anyone! Can our dysfunctional duo seize their last chance to stop him (and Deadpool's last chance to steal his stash out from under him) before something is unleashed that will haunt our heroes for years to come?
See More See Less

Spider-Man/Deadpool (2016-2019)
Because you demanded it! The Webbed Wonder and the Merc with a Mouth are teaming up for their first ongoing series ever! It's action, adventure and just a smattering of (b)romance in this episodic epic featuring the World's Greatest Super Hero and the star of the World's Greatest Comics Magazine. Talk about a real dynamic duo!

Despicable Deadpool (2017-2018)
Collects Despicable Deadpool #287-300 and the second set of Deadpool Secret Comic Variants. His days as a hero are over — now Deadpool is despicable! And what could be more despicable than…killing Cable?! That's right, Wade Wilson is out to prove himself a merciless merc by offing his best friend! But that's not the only item on his evil agenda! Deadpool has a lot of unfinished business, an
Deadpool (2018-2019)
Collects Deadpool (2018) #1-6. Deadpool is back to mercin’ for a living! It’s been a while since Wade Wilson has struggled to make ends meet, but things are tough all over. While Deadpool tries to get his humble business back off the ground, a catastrophic threat so unfathomably huge — so mind-breakingly cataclysmic that it defies description — is heading toward Earth, and only one pers
Deadpool (2015-2017)
He's annoying. He's dangerous. He smells terrible. But the public loves him. That's right- the Merc with the Mouth may make money for missions of murky morality...but he's become the most popular hero in the world for it. Eat that, Spidey! The world belongs to Deadpool. The fan favorite team of Gerry Duggan and Mike Hawthorne return to bring Deadpool into his most successful adventures yet! 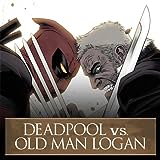