More classic tales of Star Wars torn from the newspapers of a long time ago! Luke Skywalker, Princess Leia, Han Solo, Chewbacca, C-3PO and R2-D2 continue to take the fight to the Empire, but it’s a dangerous galaxy out there! As Luke is enslaved by the Serpent Masters, Doctor Arakkus prepares a death trap — and the rebels’ base is besieged! There are dangers in the depths of Aquaris and an ancient threat lurking in the heart of Yavin’s moon! But who is that claiming to be Ben Kenobi?! As the Rebel Alliance prepares to relocate to the ice planet Hoth, Luke gears up for a climactic showdown with Darth Vader — and Han Solo faces a rogues’ gallery of bounty hunters including the mysterious Boba Fett!
See More See Less

Star Wars: The Empire
Collects Star Wars: Darth Vader and the Ghost Prison #1-5. A traitorous uprising against the fledgling Galactic Empire leaves Emperor Palpatine close to death. Saving the Emperor—and the Empire—appears to be a lost cause... unless Vader can uncover the secrets of the Jedi Council and locate the mysterious "Ghost Prison." 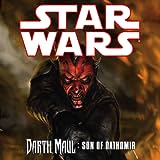 Star Wars: Darth Maul - Son of Dathomir (2014)
Getting cut in half by Obi-Wan Kenobi and being rejected by his former Sithmaster Darth Sidious isn't going to defeat Darth Maul. In fact, it only makes him mad enough to take on the galaxy, with an army of Mandalorians!
Star Wars: The Rebellion
Collects Star Wars (2013) #1-6, Star Wars: FCBD 2013 #1. This is Star Wars as you remember it... and as you have never seen it before! We're taking you back to those heady, adventure-filled days following the destruction of the Death Star—when the Empire ruled, the Rebels were on the run, and the galaxy was a dangerous place where anything might happen!
Star Wars Universe
Collects Star Wars Tales (1999) #1-4. Collecting the first four issues of the anthology smash sensation, Star Wars Tales contains thrilling stories featuring Darth Vader, Obi-Wan Kenobi, Han Solo, Emperor Palpatine, C-3PO, R2-D2, Lando Calrissian and a cast of thousands! Tales explores every corner of the Star Wars galaxy and keeps readers coming back for more!