The Sith Empire has returned to the galaxy! Determined to crush the Republic that sent them into exile, the Sith launch an attack on the galaxy's Outer Rim — with their sights set on the Core Worlds, the heart of galactic unity. The Sith's Dark Council claims to want peace — but both sides have unleashed spies that could turn the tide of war! And on a frozen world, a lost tribe of Sith cut off from the galaxy is about to have its fate!
See More See Less

Star Wars: The Empire
Collects Star Wars: Darth Vader and the Ghost Prison #1-5. A traitorous uprising against the fledgling Galactic Empire leaves Emperor Palpatine close to death. Saving the Emperor—and the Empire—appears to be a lost cause... unless Vader can uncover the secrets of the Jedi Council and locate the mysterious "Ghost Prison."
Star Wars Universe
Collects Star Wars Tales (1999) #1-4. Collecting the first four issues of the anthology smash sensation, Star Wars Tales contains thrilling stories featuring Darth Vader, Obi-Wan Kenobi, Han Solo, Emperor Palpatine, C-3PO, R2-D2, Lando Calrissian and a cast of thousands! Tales explores every corner of the Star Wars galaxy and keeps readers coming back for more!
Star Wars: The Rebellion
Collects Star Wars (2013) #1-6, Star Wars: FCBD 2013 #1. This is Star Wars as you remember it... and as you have never seen it before! We're taking you back to those heady, adventure-filled days following the destruction of the Death Star—when the Empire ruled, the Rebels were on the run, and the galaxy was a dangerous place where anything might happen! 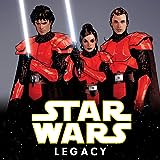 Star Wars: Legacy
The Jedi Temple is attacked, an Emperor is betrayed, and the Sith are born anew! A lot can happen in a hundred years, but all of the above happens just in this first issue! Not since Luke Skywalker first stepped aboard the Millennium Falcon has the galaxy seemed like such a vast, exciting, dangerous place!