Eradicate all resistance! Commander Ellian Zahra has been tasked by the terrifying Darth Vader with the job of tracking down the remnants of the rebel fleet, scattered across the galaxy since the Battle of Hoth. But what is behind her bitter and personal quest for revenge against Leia Organa? When the powerful, dark secret is revealed, the rebels' Fourth and Seventh Divisions will pay the price! Luke Skywalker, Wedge Antilles and Shara Bey must fly into battle against an onslaught of TIE fighters in one of the greatest dogfights ever witnessed! Meanwhile, the Rebel Alliance's elite operations team, the Pathfinders, will take on a daring heist right under the nose of the Emperor — with Lando and Lobot along for the ride!
See More See Less

Star Wars (2020-)
Collects Star Wars (2020) #1-6. It is a dark time for the galaxy in the wake of The Empire Strikes Back. The rebel fleet is scattered following a disastrous defeat at the Battle of Hoth. Han Solo is frozen in carbonite and lost to the bounty hunter Boba Fett. And Luke Skywalker is wounded and reeling from learning the horrible truth about his past. Darth Vader did not kill Luke’s father — h

Star Wars: Darth Vader (2020-)
Collects Star Wars: Darth Vader (2020) #6-11. Darth Vader failed to turn his son, Luke Skywalker, to the dark side. Vader sought revenge against those who hid Luke from him for all these years…and in doing so nearly betrayed his master. It did not go unnoticed by Palpatine…and now it is time for Vader’s next lesson. Now, left battered and broken by his punishment, the Dark Lord drags himsel
Star Wars: Doctor Aphra (2020-)
Collects Star Wars: Doctor Aphra (2020) #1-5. The rogue archaeologist returns with a new crew and a new mission! With the Rebel Alliance on the run after their defeat at the Battle of Hoth, it’s never been a more dangerous time for outlaws and scoundrels. But after a string of bad luck and near escapes, Doctor Aphra is back on the job — hunting the score of a lifetime that’s too good to p
Star Wars: Bounty Hunters (2020-)
Collects Star Wars: Bounty Hunters (2020) #1-5. Never betray a bounty hunter — especially if it’s Boba Fett! Years ago, Valance and Bossk joined Fett on a mission that went sideways in a bad way — thanks to a violent betrayal by Valance’s mentor, Nakano Lash! The trio barely escaped with their lives. Now Lash has finally resurfaced under mysterious circumstances, and every bounty hunter 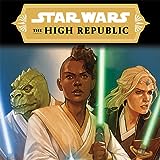 Star Wars: The High Republic (2021-)
BEFORE THE SKYWALKER SAGA! THE GOLDEN AGE OF THE JEDI! A new era of STAR WARS storytelling begins. It is centuries before the SKYWALKER SAGA. The JEDI are at their height, protecting the galaxy as REPUBLIC pioneers push out into new territories. As the Frontier prepares for the dedication of majestic STARLIGHT BEACON, PADAWAN KEEVE TRENNIS faces the ultimate choice — will she complete her Jedi T