Comics' most cutting-edge creators Make Theirs Marvel! The Incredible Hulk smashes his way through samurai warriors - then medicates himself into a bizarre love triangle! The Amazing Spider-Man realizes that with great power come great barfights! The Invincible Iron Man battles an American president and a pair of villains who've harnessed the power of cold cuts! Have no fear, True Believers - you haven't been sucked into the Negative Zone. You're simply reading Strange Tales! From the twisted minds - and talented pencils - of more than two dozen of the greatest names in independent, alternative and online comics comes an astonishing anthology of startling stories, featuring the heroes and villains of the Marvel Universe as you've never seen them before!
See More See Less 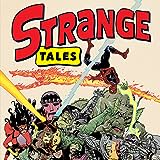 Strange Tales
At long last, the wait is over!! Marvel is proud to present the debut of this hotly anticipated three issue anthology showcasing Marvel's greatest characters re-imagined by the best and brightest talents working in independent comics today. Don't miss what's sure to be one of the most exciting collections of comics short stories ever produced!!! Every issue stars a stunning array of the best, most 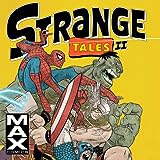 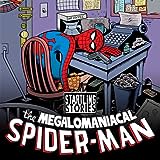 Startling Stories: The Megalomaniacal Spider-Man (2002)
In this self-contained one-shot, indie legend Peter Bagge (Hate) offers his own unique spin on everyone's favorite web-spinner! THE STORY: Shortly after he was bitten by a radioactive spider that gave him his strange powers, Peter Parker failed to stop a burglar fleeing from police. When that man went on to murder Peter's beloved Uncle Ben, Peter took it upon himself to atone for his sin of inacti 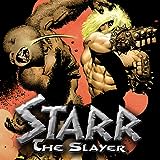 Starr the Slayer
Starr the Slayer was simply an idea floating around in the head of author Len Carson. His dreams dashed and his career on the skids, Carson decided to revisit his famous creation. But what he never expected was for his Starr to revisit him...in person! 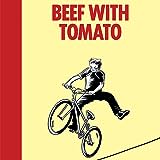 Beef With Tomato
A native New York bruiser is fed up with life in the dregs of a drug-addled Alphabet City where his neighbors are shut-ins and his bicycle is always getting stolen. He escapes from Manhattan to make a fresh start in Carroll Gardens, Brooklyn, only to face a new strain of street logic — where most everything he encounters is not as it seems.