Superboy and Robin, the sons of Superman and Batman, take center stage as a reluctant super-team in an all-new series bursting out of the DC Universe Rebirth event!

When Robin (Damian Wayne) discovers a connection between a series of mysterious crimes and the aftermath of the bizarre and deadly Amazo Virus, he needs Superboy (Jonathan Kent) to aid in the investigation. But when the duo learn that the teenage Kid Amazo has plans that put the entire Justice League in danger, they need help from an unlikely source: Lex Luthor!

Even if the odd couple of young heroes survive Luthor’s assistance, they’ll have to face a possibly greater threat: the combined forces of Robin’s tutor, Alfred Pennyworth, and Superboy’s mother, Lois Lane! 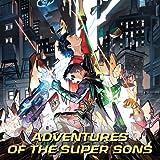 Adventures of the Super Sons (2018-2019)
The Super Sons are back in an all-new 12-issue miniseries written by Peter J. Tomasi! Check out the lost and secret adventures of Damian Wayne (Robin) and Jon Kent (Superboy) in this flashback miniseries that takes a deep dive into the bombastic bromance between the sons of the DC Universe's greatest heroes. It's an epic dual storyline that transcends current events, as Superboy and Robin find the
Teen Titans (2016-)
The Teen Titans are farther apart than ever before...until Damian Wayne recruits Starfire, Raven, Beast Boy and the new Kid Flash to join him in a fight against his own grandfather, Ra's al Ghul! But true leadership is more than just calling the shots-is Robin really up to the task? Or will the Teen Titans dismiss this diminutive dictator?