When Dougie eats his brother Wayne’s pet brain, which is actually a potato, he becomes twice as smart as any kid has a right to be. That's exactly why he must be stopped! Can Wayne put an end to the spudding genius' plans before one of his astounding inventions changes the world? Or, is his scheme half-baked?

Potato-Brained Ideas, peels off Wayne and Dougie's tale along with many others, including ones about beings from beyond the North Pole, killer sweatpants, the M.A.T.s (monster aptitude tests), and a sandbox city torn apart by civil war.
See More See Less 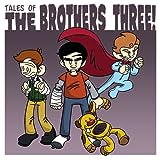