For years, Titans Tower has been a haven for young heroes, and has offered them a chance to train alongside their peers and to distinguish themselves from the mentors they will one day replace. After years of dormancy, original Titans Cyborg, Beast Boy, Raven and Starfire aim to recreate that same premise for a new generation of heroes. Outsiders (2003-2007)
Spinning out of the events of THE TITANS/YOUNG JUSTICE: GRADUATION DAY, a new superteam is formed under the leadership of former Titans leader Nightwing and his longtime Titans ally Arsenal.
JSA (1999-2006)
The world's first superheroes reunite once more to form the Justice Society of America! Join the original Green Lantern Alan Scott, the first fastest man alive the Flash Jay Garrick, the man who taught Batman to box, Wildcat, and a slew of younger heroes as they built the world of tomorrow, today! 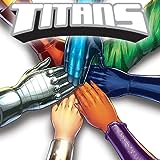