The Abandoned: Left behind by the Golden Age

The Golden Age of Comic Books - what a wonderful sounding phrase. It inspires images of glitz and glamour, where everything is possible and the medium of comics is treated with love and respect.

Except none of that is true of course. Looking back at those years, we find that while there were no limits to what publishers could print, there were a lot of limits on what they would print, what the public would accept and ultimately what they wouldn't.
Everybody wanted a piece of the comics pie, and thus the world was introduced to thousands of characters that were quickly forgotten for one reason or the other. These days, if a character doesn't resonate with the readers they might get re-tooled and re-introduced, maybe even as a side character in a movie or TV show but back during the golden age, they were just abandoned.

This book shines a light on a few of these characters, who only got a single chance to shine and for one reason or the other didn't. They are the abandoned and this is their story.
See More See Less 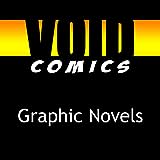 Void Comics Graphic Novels
Graphic novels are comic books that follow the classic novel format of a beginning, middle and an end as opposed to the ongoing periodical format of regular comics. Each graphic novel is stand alone, self contained and tells a complete story. The Void Comics graphics novels are NOT part of the Void Comics shared universe and instead each novel is its own thing.