The Art of Ramona Fradon

Series
The Art of Ramona Fradon

"Ramona Fradon was one of the most prolific and high profile female cartoonists at a time when the comic book field was dominated by men. Her illustrative style influenced a generation of Aquaman readers, only to gain a larger following when she co-created Metamorpho, one of the most unique characters of comic's Silver Age. She demonstrated an apt ability to work in multiple genres with a flair for the comedic as seen in Plastic Man and later on Super Friends. She then made her mark by replacing Brenda Starr's creator Dale Messick on the long running newspaper strip.

The Art of Ramona Fradon is an in-depth, fascinating retrospective in the legendary illustrator's own words, shared in conversation with Howard Chaykin (American Flagg!) and accompanied by the finest examples of her work from such classic comics as Adventure Comics, The Brave and the Bold, Brenda Starr, House of Mystery, Metamorpho, Plastic Man, The Super Friends, World's Finest Comics, and more!"

George Perez: Storyteller
Over 200 full-color pages highlight the magnificent career of artistic legend George Perez! From his early days at Marvel on such titles as Fantastic Four and The Avengers to DC Comics' landmark titles, New Teen Titans and Crisis on Infinite Earths, plus independent work for T.H.U.N.D.E.R. Agents and so many others, along with his own creations Sachs and ...
The Art of Painted Comics
The history of painters in comics goes back to the dawn of pulp magazine covers. From "The Shadow" and "The Spider" to "The Black Bat" and so many other characters, painter's works have graced the covers of comics and pulps, which have influenced many artists over the decades. This deluxe coffeetable art book, edited and overseen by Alex Ross — one of the comic industry's most recognized painter 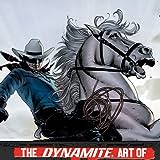 The Dynamite Art of...
For the last decade, artist Lucio Parrillo has crafted some of the most incredible painted images ever seen in comics! For Dynamite Entertainment, Parrillo has painted the most iconic images of the most iconic characters in the company's library! Now, all of this incredible art is presented in one incredible hardcover collection! Red Sonja: From Barbarian to Queen! Vampirella: Drakulon and Be
Dynamite Art Books
Alex Ross' ultra-realistic, painted renditions of iconic superheroes have made him a superstar. In the vein of acclaimed and fan-favorite Alex Ross books such as Mythologies and Rough Justice, we are proud to present the ultimate collection of Alex Ross art from his extensive collaboration with Dynamite, The Dynamite Art of Alex Ross. Containing sketches, designs, layouts and pencils, interior wor