Iron Heights is the toughest penitentiary in Central City—tough enough to hold rogues like Captain Cold and Mirror Master. But lately it’s been a prison of sorts for Barry Allen as well, ever since Barry was pulled off his job as a CSI and sent to the facility to work in crime scene preservation. From his new post, the Fastest Man Alive witnesses for the first time what life is like for criminals after their arrest. And thanks to Iron Heights’ tough-as-nails Warden Wolfe, it isn’t pretty.

But now life in prison has turned into a death sentence for one inmate, and since Barry’s no longer working at the crime lab, he isn’t able to help the murder investigation. As the Flash, however, he’s determined to get to the bottom of the mystery, even if it runs him headlong into a trap.

A new player has been giving Copperhead, Central City’s leading crime lord, a run for her money, and whoever it is has ties to the prison...and the murder. Can the Flash solve the mystery and take down a rising crime boss, or is there really no escaping Iron Heights? 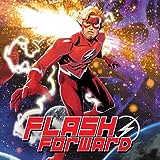 Flash Forward (2019-)
His name is Wally West-and he was the Fastest Man Alive. That is, until the Multiverse was rewritten without him or his family in it. Wally returned and tried to make it work, but the damage was done. Spinning out of the events of HEROES IN CRISIS, follow the man who called himself Flash on an adventure to find redemption in a cosmos that has fought so hard to destroy him.
Justice League (2018-)
Spinning out of the cataclysmic events of Dark Knights: Metal and the universe-defining No Justice, the core members of the Justice League--Superman, Batman, Wonder Woman, Aquaman, The Flash and more--are finally reunited! The cosmos suddenly opens up to new threats that the Justice League could not imagine! As Lex Luthor and Batman race to solve a mystery going back to the beginning of the DC
Nightwing (2016-)
He's been Robin, Batman, a spy, a ghost. Now, Dick Grayson returns to Gotham City to reclaim the life that was taken from him. But when a new evil threatens those he loves most, Nightwing faces being torn away from home once again in order to destroy the dark force once and for all. Powerhouse artist Yanick Paquette (BATMAN, SWAMP THING) joins series writer Tim Seeley (GRAYSON, BATMAN & ROBIN ETER
Aquaman (2016-)
Black Manta returns, and as Aquaman attempts to broker lasting peace between Atlantis and the surface world, his greatest foe engineers a plan to destroy everything and everyone the undersea hero loves. THEY SAID IT: "I'm excited to draw a vast undersea world with all the visual flourishes of fantasy and science fiction that it affords," says artist Brad Walker. "I've done so much work in outer