In 2000, writer Geoff Johns took over THE FLASH and redefined a comic book icon for a new generation. Now, re-experience Geoff's unforgettable five-year run in these stunning tales of Wally West, the Fastest Man Alive.

Wally West may be the Fastest Man Alive, but even he has trouble keeping up with the changes in his life. As the Flash continues to risk his life defending Keystone City, the threat of the Rogues grows in number. As new costumed criminals enter the battle, the Flash must do everything in his power to prevent an attack that is both deadly and personal. 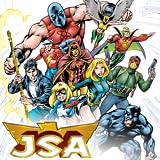