“John Constantine is getting back to basics… the strong characterization makes it an enjoyable read.” —IGN

A wave of demonic possession is about to hit London, and its first victim is someone near and dear to John Constantine: Detective Chief Inspector Margaret Ames, whose recent involvement with the Hellblazer has left her (as such interactions often do) both furious and vulnerable.

Tricked by an unscrupulous priest into playing host to one of Hell’s more enterprising inmates, DCI Ames is about to become the catalyst for an infernal plan to unleash a flood of unquiet spirits onto the mortal plane—unless Constantine can find her first.

He’s not the only one stalking the inspector, however. The Vatican has sent its own agent, Helena Bertinelli (a.k.a. the Huntress), to nip this potential apocalypse in the bud—and she’s not overly concerned with avoiding casualties, civilian or police. Can Constantine keep the Huntress at bay while still managing to save Margaret’s soul—not to mention the rest of the world?

Writer Tim Seeley and artists Davide Fabbri and Christian Dalla Vecchia bring this acclaimed chapter in the saga of John Constantine to its phenomenal finish in The Hellblazer Vol. 4: The Good Old Days, collecting issues #19-24 of the celebrated series.
See More See Less 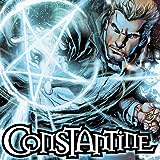 Constantine (2013-2015)
The star of JUSTICE LEAGUE DARK is unleashed in his own series! Liar, cheater, manipulator: John Constantine is all of them, and yet he uses these skills and more to protect the world from the darkest corners of the DC Universe.
John Constantine: Hellblazer - City of Demons
When John Constantine is run over by a truck, it takes a little while for England's nicotine-fueled magus to realize that he's perched between life and death! A stand-alone five-issue limited series by Si Spencer ("Torchwood") and Sean Murphy (AMERICAN VAMPIRE: SURVIVAL OF THE FITTEST).
Hellblazer
An apathetic, somewhat amoral occultist, John Constantine always manages to come out on top through a combo of luck, trickery and genuine magical skill. In this seminal Vertigo series, uncover a horror story wrapped in a mystery starring a hero who's at his best and worst, all at the same time...