Part one!
The Inventor is the story of how one man stood against the goliaths of industry and changed the world with nothing but his mind, passion, and vision for a better humanity.

At the end of the 19th century, during a time when inventors were known as wizards and corporations considered their kingdoms, emerged an extraordinary league of gentlemen who shaped the modern world with their minds, money and machines. Thomas Edison, George Westinghouse, J.P. Morgan, Guglielmo Marconi, Mark Twain, Lord Kelvin, Swami Vivekananda and others stood at the helm of the ship as the perfect storm was approaching.


At the eye of the storm stood TESLA, a mystic inventor whose genius bordered insanity as he blurred the lines between magic and science. His ideas and inventions were so progressive that he catalyzed the second industrial revolution giving birth to the Electrical Era. Yet despite his genius, passion and impact on humanity, his on-going battle with Edison allowed others to make great fortunes on his inventions leaving him penniless, alone and forgotten...until now.
See More See Less

Mindfield
THE WAR ON TERROR HAS JUST BEGUN! The CIA has created an elite team of telepathic agents dedicated to fighting domestic terrorism. But as Connor and the rest of his crew take to the streets, can they handle the dark thoughts buried inside the minds of 'we the people?' Aspen's newest hit series, MINDFIELD, comes to you courtesy of creator J.T. Krul and new comer Alex Konat who present to you a worl 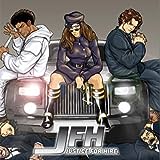 JFH: Justice For Hire
The Retribution Industry is born, allowing for private-counter-terrorist forces to thrive, creating rival teams that fight for the industry's #1 spot. Following in the footsteps of their legendary fathers, martial arts mega-duo Ebony and Ivory become overnight media sensations, kicking ass in the name of justice along with their sexy, gun-toting chauffeur/bodyguard, Louisa, at their side. But now
Champions of the Wild Weird West
Part 1: The honor of a samurai, the mysticism of the Native American Culture, and a whole heck of a lot of Old West Action. When a fallen samurai is drawn to the United States to save his wife-to-be and her father, he is drawn into a plot much more complex than a simple rescue. Meeting up with an adventurer, his Indian financial advisor, a mercenary, and a former priest, they set off on a quest to
John Henry
John Henry, a former slave, wasn't about to let some new-fangled steam hammer replace his ability to earn an honest wage as a steel driving man. He'd beat that machine, or die with his hammer in his hand. We all know the outcome of that legendary contest. In this alternate history, however, John doesn't die in his heroic effort, but instead slips into a coma, only to awaken to his worst nightmare.