The Punisher Vol. 1: Black and White

For years the Punisher waged war on crime in New York, but a lead on a major source of drugs, weapons and more has set his sights due west! Frank Castle is in the City of Angels, taking on the powerful Dos Sols gang - but when he discovers their newest weapon, it's bad news...for him! Now the Punisher must duke it out with A.I.M., even as the Dos Sols' takeover of LA begins and war breaks out in the streets! Will the city burn, or can Frank fight fire with fi re? And even if Frank can overcome A.I.M. and the Dos Sols, can he escape the tightening noose of the Howling Commandos?
See More See Less

Punisher (2011-2012)
For Frank Castle, death comes easy -- life is where things gets complicated. The city is teeming with methodical criminals and the police force is barely keeping its head above water, so it's up to the Punisher to serve his own brand of justice.
The Punisher (2016-2018)
FRANK CASTLE LOSES CONTROL! A by-the-numbers drug bust is about to take Frank Castle by surprise…and he HATES surprises. The horrible fallout threatens to send The Punisher into the heart of darkness, but Castle won't make that journey alone: A DEA agent is on his trail and attempting to get into his head…but what horrors will she find there, and will she survive the experience? 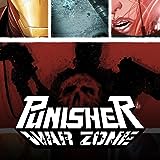 Punisher: War Zone
The Punisher vs. the Avengers! Welcome to the War Zone.
The Punisher (2018-2019)
Collects Punisher (2018) #1-5. You can take the Punisher out of the War Machine… Frank Castle may no longer have the Stark-designed armor, but he has retained his taste for “big game” criminals — and he’s hungry for more. But the paths to such high-value targets are fraught with dangers greater than any Frank has faced before, and this lone wolf could use powerful help on his way acro