The chase is on across the Nine Realms to capture Malekith, former lord of the Dark Elves! To find him, Thor allies with a Dark Elf sorceress, a gun-toting Light Elf, a gargantuan Mountain Giant, a dynamite-loving Dwarf and a particularly surly Troll! But when one teammate falls, will it mean war for all Nine Realms? As a traitor within the group strikes and Thor prepares to take drastic measures, Malekith stages his final bloody raid — on Earth! Then, Thor battles the multinational super-corporation Roxxon, but has he met his match in its ruthless new CEO, the “Minotaur”? And millennia from now, King Thor and his granddaughters battle to save what remains of Earth from Galactus! Plus: Jane Foster returns! Young Thor vs. Frost Giants! The origin of Malekith! And King Thor’s Original Sin!
See More See Less

The Unworthy Thor (2016-2017)
The Odinson's desperate search to regain his worthiness has taken him out into the cosmos, where he's learned of the existence of a mysterious other Mjolnir. This weapon of unimaginable power, a relic from a dead universe, is the key to Odinson's redemption — but some of the greatest villains of the Marvel Universe are now anxious to get their hands on it as well. Can The Odinson reclaim his hon
Thor (2014-2015)
Who is the new and mysterious woman wielding the Hammer of Mjolnir? Let she who is worthy possess the power of the Mighty Thunderer! Introducing a Thor that the Marvel Universe has ner' encountered before. But is this new Thor Asgardian, or from Midgard? 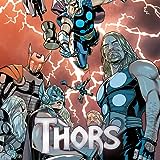