TRACE ADKINS continues his comic book adventure as LUKE MC BAIN -- who's taken a job at his family's Louisiana timber mill to keep an eye on his brother, Paul. Sawdust is in McBain's blood, but his blood's going to flow if he doesn't watch his back. An industrial "accident" and a talk with the family lawyer prove that. Paul's up to something...but what? Later, sitting high above the town of Eden, McBain sees a big house and a fancy party -- a sad look at how easy his life could've been. The mystery deepens when a romantic walk in the woods with Callie turns deadly, as a sniper uses the couple as target practice. Times are hard, and people want him dead -- but this axe handle-wielding, God-fearing Southern man ain't goin' down without a fight. He doesn't say much, but you can count on McBain!
See More See Less 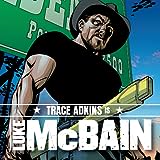 Trace Adkins is Luke McBain
"Back to Eden" Part 1 of 4 Country superstar TRACE ADKINS is LUKE MC BAIN, a man who makes the hard decisions. He doesn't say much, but he'll kick your ass if you get out of line. He's returned to his Northern Louisiana hometown to settle a score, but the town has changed, and the people he grew up with need his help. God help anyone who gets in his way. Trace Adkins has sold over 10 millio