Peter Stanchek and his band of teenage runaways are harbingers of a new age, born with the power to change the world... or break it. Plagued by emerging psionic powers he hardly understands, Peter turns to Toyo Harada and his Harbinger Foundation, an organization dedicated to finding and teaching young people like Peter. But when Peter learns to what lengths Harada will go to further his secret agenda, he turns on his mentor, gathering a group of like-minded rebels. On the road and always just one step ahead of Harada and his hit-squad of super powered Eggbreakers, these renegade harbingers will have to learn how to use their powers to change the world for the better along the way. This deluxe edition collects the critically acclaimed masterpiece that kicked off a whole new age of superheroes from legendary creators Jim Shooter (Secret Wars) and David Lapham (Stray Bullets).

Valiant Masters
Dive deep into the greatest stories of the original Valiant Universe – remastered and collected together for the first time anywhere – with the VALIANT MASTERS line of deluxe edition hardcovers! Relive the best-selling adventures of Valiant's definitive heroes – NINJAK, SHADOWMAN, ETERNAL WARRIOR and more. Featuring all-time classic work by some of comics' most celebrated creators, including 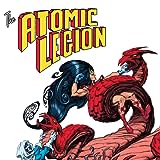 Atomic Legion
In a hidden fortress near the North Pole, the greatest heroes of a past age live secluded from the world that rejected them. But when their benefactor-a mysterious scientist known only as the Professor-is kidnapped, it's up to a young boy to rally the robots, monsters, and superheroes in the fortress to come to the rescue as the Atomic Legion! * From the writer of the critically-acclaimed 47 Ro
Ninjak (2015- )
For the first time, Ninjak's past and future collide in the pages of an all-new ongoing series from New York Times best-selling writer Matt Kindt (Rai, Mind MGMT) and superstar artists Clay Mann (X-Men: Legacy, Gambit) and Butch Guice (Captain America, Action Comics)! Then: Meet inexperienced MI-6 recruit Colin King on his first mission in the field as he learns the basics of spycraft and coun
Bloodshot (1993-1996)
Angelo Mortalli has become the ultimate killing machine. His memories were erased and his blood was infused with microscopic computers called nanites. These nanites allow him to heal wounds quickly, dominate electronic devices, and fully control every aspect of his body to maximize his physical capabilities. A modern-day Frankenstein, he wages a one man war-- taking out the mob, the police and his
UNITY (2013- )
To kill a king, he has created an army. The world's most dangerous man, Toyo Harada, has been struck by the one thing he never thought possible - fear. Halfway across the globe, a new power threatens to topple modern civilization and, to preempt the cataclysm that is to come, Harada will unite the most lethal, most volatile, most unforgiving team the world has ever known - UNITY. Their mission: