Horror icons from two universes collide as Ash Williams, the chainsaw-armed Chosen One of the small and big screen, crosses paths with the supernatural superheroine Vampirella in a story set during the events of the cult classic film, Army of Darkness!

When Ash misspoke the incantation to acquire the Necronomicon, an unholy book written in blood, the spell ripped Vampirella - a force for good, despite her blood-hungry fangs - from her own time and back to 1300 AD. Infected by Deadite magic, she stalks the halls of Lord Arthur's castle, unable to control her thirst. Even if that time-lost chucklehead Ash can free her of the demonic mutation, can he convince his allies - primitive screwheads that they are - that she shouldn't be burned at the stake?

"An epic clash between the iconic figures of Ash and Vampirella... Downright groovy!" - Horror News Network

"Dynamite seems to have really taken a shine to two of cult pulpdom's fan favorites." - The Pullbox

"Mark Rahner does a solid job... I can mostly hear Bruce Campbell's voice." - The Fandom Post

"Come for the drunken revelry, stay for the... mayhem." - Comics for Sinners 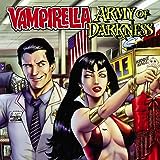 Vampirella/Army of Darkness
During his time trapped in the England of 1300 A.D., Ash listened to the terrified primitive screwheads tell of a horrific flying Deadite similar to the one he blasted out of the air when he arrived - but much deadlier. At the same time, a raven-haired temptress wants to give him some sugar - as his last meal! The horror mash-up you've been waiting for, from Mark Rahner (Twilight Zone, Army of Dar

Vampirella vs. Dracula
Spinning out of Alan Moore's retelling of the ageless horror classic, Dracula has come to America to play out his timeless narrative in this brave, New World. Only he didn't realize ANOTHER vampire already beat him to it. Drawn to one another across continents and centuries by a mysterious force, both Vampirella and Bram Stoker's immortal monster find themselves sucked into a time-tossed epic of l 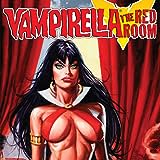 Vampirella: Red Room
Written by Dan Brereton (Nocturnals, The Last Battle, Punisher: Frankencastle, Red Sonja), Vampirella and a colorful, driven lawman track vampires on a blood-letting rampage through rural Arkansas to the Red Room, an underground circuit where high rollers stage mortals vs. monster death matches. She faces a host of fiends, quickly realizing more arcane forces drive the bouts and their frenzied com
Army of Darkness vs. Hack/Slash
After the events of the HACK/SLASH series, Cassie Hack is doing her best to live a normal life. But a Deadite attack forces Cassie back into action and this time, she's not alone! Meet Cassie's new partner: Ashley J. Williams! Can the pair keep from killing each other long enough to quest for the stolen pages from the Book of the Dead? Will Ash get some sugar? Or will Cassie make him kiss it? It's
Danger Girl and the Army of Darkness
Abbey Chase, the world's most daring adventuress, returns to action as she aims to recover a dark and mysterious piece of ancient history. When Abbey learns that the elusive Book of the Dead has resurfaced and fallen into nefarious hands, she and the Danger Girls embark on a mission to track down the powerful tome. But when their journey leads them to cross paths with another seeking the book - a