With Vampirella trapped in Dracula's shifting past, Jack Halloran, is left to deal with the machinations of his modern-day incarnation, the mysterious and deadly Dragunsun. But when changes to the eternal narrative first chronicled by Bram Stoker ripple through the present, each of the characters affected, in all the timelines they cross, must adjust, adapt and reorient themselves if they wish to see the story through until the end, much less survive the effects. And when the strange and mystical "Order of the Dragon" make their presence known, everyone learns this is all neither an accident, nor a game.

Vampirella vs. Dracula
Spinning out of Alan Moore's retelling of the ageless horror classic, Dracula has come to America to play out his timeless narrative in this brave, New World. Only he didn't realize ANOTHER vampire already beat him to it. Drawn to one another across continents and centuries by a mysterious force, both Vampirella and Bram Stoker's immortal monster find themselves sucked into a time-tossed epic of l

Vampirella Strikes
Fearful that her monstrous nature is taking control, Vampirella takes solace in some extreme violence, and conversation, all topped off with a nice glass of Merlot, in a Boston tavern overrun by the demonic in the first part of this six issue story. Living in a world of growing supernatural threats, Vampirella never knows what she will be facing from one moment to the next, but what she finds wait
Vampirella and the Scarlet Legion
But when an ancient prophecy of doom is uncovered and a new push to resurrect the foulest demons from the pit is revealed, it's clear Vampirella won't be able to take them on alone. Enter THE SCARLET LEGION, assembled to keep the dark things at bay and protect this world from the evils which lie beyond. The only question is, will they see Vampirella as friend... or foe? 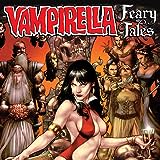 Vampirella: Feary Tales
Author Nancy A. Collins (Vampirella, Swamp Thing, Sunglasses After Dark) has called upon some of today's finest creative talents - including Gail Simone, Steve Niles, Joe R. Lansdale, Devin Grayson, and Stephen R. Bissette - to celebrate Vampirella's 45th Anniversary by crafting five issues of twisted tales, bizarre bedtime stories, and fearsome fables in the tradition of the original Warren magaz
Vampirella: Southern Gothic
FIRST ISSUE! She's fought vampires, aliens, magicians and monsters...but can she survive MISSISSIPPI!? While aching from a glowing wound made by a demon's blue blade, Vampi heads to the Deep South to unravel a mystical mystery tied up in an old flame, religion, and lots and lots and lots of blood.