Series
Vengeance of Vampirella
Subscribe to Series
How Subscriptions Work

Originally debuting in 1994, Vengeance of Vampirella portrayed a more savage and feral look at the Daughter of Drakulon. Now, for the 50th Anniversary of Vampirella, original series writer Tom Sniegoski (joined by the incredible art of Michael Sta. Maria) is back and issue #1 features a host of incredible cover artists.

Humanity holds on, but barely, the playthings and slaves of a multitude of supernatural monstrosities that have made the earth their own. Mistress Nyx continues to rule the planet, her Chaos Lords reigning over the various regions of the world, but she is getting bored – There's no one to challenge her! That is, until a small, but determined rebellion finds what could be their savior or seal their doom!

This new series – and anniversary event – is not to be missed!

THOMAS E. SNIEGOSKI is the author of more than two dozen novels for adults, teens, and children. His teen fantasy YA series Fallen was adapted into a trilogy of monstrously successful TV movies by ABC Family Channel. His other books for teens include Sleeper Code, Sleeper Agenda, Legacy, and Force Majeure, as well as the series The Brimstone Network. The author's first adult novel, A Kiss Before the Apocalypse, developed into a series of novels about the character Remy Chandler.
See More See Less 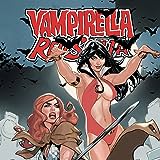 Vampirella/Red Sonja
The first ONGOING series, co-starring The Daughter Of Drakulon and The She-Devil With A Sword! From Eisner winner JORDIE BELLAIRE (Buffy The Vampire Slayer, Redlands) and DREW MOSS (Star Wars) comes a saga spanning space and time, filled with horror, adventure, mystery and murder! 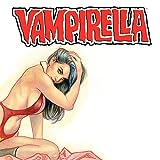 Vampirella (2019-)
In July 1969, the world was first introduced to Vampirella. 50 years later, she doesn't look a day older!!!! Now, to celebrate her gold anniversary, Dynamite is launching a brand-new, ongoing series featuring the talents of Christopher Priest (Black Panther, Deathstroke, Quantum & Woody, Justice League) and European star/American star-in-the-making, Ergün Gündüz (Tales of the Great War, Taxi
Red Sonja: Age of Chaos
The past meets the present with the future of literally everything at stake! The warrior Red Sonja has a plan to keep freshly killed wizard Kulan Gath from resurrecting himself again -- but when the plan backfires, it allows a whole new kind of Chaos! to infest the Hyborean Age! Will these new beings be any easier to deal with than Kulan Gath, or has Sonja called a worse evil to her world? It's th 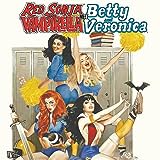 Red Sonja & Vampirella Meet Betty & Veronica
Mystery, murder, and mayhem descends on Riverdale as four of your favorite comic book women meet for the first time. A string of paranormal, unsolved murders leads the vampire hunter Vampirella and her sword-wielding barbarian partner Red Sonja to the small, sleepy town where things always seem to happen... There they discover Betty and Veronica, investigative reporters for the high school newspap