SORCEROID: A sentient, robotic mage defends a mysterious supernatural force from a secret agency devoted to the eradication of magic.

PATH OF THE BLACK HAND: Pain and doom follow the appearance of a dark mark. But, for the only man who can see it, is the black hand death itself, or simply madness?

GOOD INTENTIONS: Eight adventurers embark on a righteous quest to save their realm. But what songs will the bards sing of those who went bravely into the night... never to return?

MNEMOSYREN: Rowan - a young professional and former competitive gymnast - is violently exposed to an international conspiracy when she disrupts an assassination attempt on an acclaimed CEO. In the process, Rowan encounters the Mnemosyren, a piece of bleeding-edge technology that looks like a tattoo and carries the most dangerous kind of data: human memories.

CORNERS: A specter from the past interrupts an elderly man's solitude, leading him on a journey of rediscovery.
See More See Less 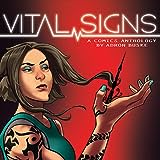 Vital Signs: A Comics Anthology
The Vital Signs comics anthology features five tales from writer Adron Buske across a variety of genres, each featuring the wonderful work of a different artist. This international roster of talent includes artists living in the Philippines, England, Australia, and the United States. Each provided a distinct visual flair to their story, bringing each unique world and set of characters to vivid