Josiah Black has been many things, from outlaw to sheriff and from husband to widower. As a hired gun he takes on the task of tracking down and killing a murderer, but in doing so gets drawn into a world that he believed only existed in folk tales, adding 'monster hunter' to his list.
As time, and the tale, progresses however he begins to doubt what he is doing. Is he being manipulated ? Are they really monsters that he is hunting and killing, or is he himself the only monster ?
WesterNoir has been described as 'Deadwood' meets 'They Live'.
See More See Less 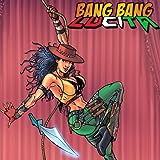 Bang Bang Lucita
Lucita, a Mexican immigrant moonlights as a sexy swashbuckling knife fighter. This series is a fun modern take on the Western genre, brought to you by the creators of Snake.