When the denizens of Earth's military cemeteries begin to rise from the dead, who will stop them? Over ZOMBIE WAR's two giant-sized issues, Jina, a tough-as-nails fighter pilot sets about uncovering what reanimated these heavily armed monsters and more importantly, what will stop them?! Featuring scripts and layouts by TMNT co-creator Kevin Eastman and art by Eric Talbot (Heavy Metal), this new incarnation will present ZOMBIE WAR in full color for the first time, courtesy of TMNT colorist Ronda Pattison!

Sulk
Jeffrey Brown takes a break from books about girls for this humorous short story collection featuring fiction, gags and autobiography. Included are such gems as "My Brother Knows Kung Fu" and "Action Television Show."
The Monstrous Collection
One modern horror mainstay combines with one legendary master in this showcase of Bernie Wrightson's beautiful black and white art.
Voyage to the Deep
Follow the adventures of a shape-shifting atomic sub battling sea creatures, arctic monsters, sonic attacks, anti-matter generators, global terrorism, and more! Four tales of the atomic submarine Proteus and her crew in one graphic novel! First, the submarine Proteus has just finished its shakedown run and heads out to explore the Mariana Trench, but when the ship arrives, it not only has to deal 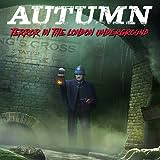 Autumn
London 1942. The true horror wasn't from the air or in the streets...it was underground. As German bombs pummel the city of London, the leaves of autumn begin to fall and so do the victims. A young boy's fascination with a local serial killer will plunge himself into a life-long obsession. The story of Autumn is a number of things: a coming of age story, a tale of revenge, a study in obsession, a